About the author and the creation of the project 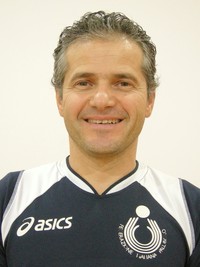 Gianpaolo Lucatti, a physical education teacher, graduated first in accounting and then in motor sciences, with honors at the ISEF in Florence in 1990. He holds several patents and has served as an instructor, in many national sports disciplines.

He has carried out activities throughout the field, from kindergarten children, 4-6 years old, up to gentle gymnastics for the elderly, passing through fitness, aerobics, bodybuilding, football, artistic gymnastics, volleyball, Olympic Centers, Training Centers and Ludico Motors, Playsport, Fantathlon, swimming, assistant bathers, and other related activities. He has had teaching experiences at public schools, private gyms, in prison, in swimming pools, at summer solar camps, etc. He has always tried to make his best duty as an educator and animator, as a teacher and coach, aware that everything he can teach his students is only a small part of what the students themselves can teach him.

Since 1995, he has also a great passion for computer science, in particular for open source software (Gnu/Linux, LibreOffice, The Gimp, Inkscape, etc.) and for programming, as well as for the creation of Web Sites. One thing in particular, however, despite having tried several times, has never succeeded too well: to realize the drawings of the exercises that he carefully organized and cataloged in different collections. As the saying goes: “an image is worth a thousand words”

Hence the idea of GESTICS, create a program that would allow even those who do not know how to draw to create images for sports exercises, game and training schemes, technical and tactical exercises. Looking on the internet you can find something similar, there are several, more or less complicated, but all those I found have been made in my opinion in a fairly manned way and with reduced functionality, since they were programmed from the beginning and not starting from a base of acquired and shared features.

The main idea was that the software was simple to use, it could be used on all operating systems, in all languages and that it had features superior to those of other software that were already present. As happens in the open source software, it was not necessary to start from scratch, but from the point where others had already arrived. No need to reinvent the wheel!!!

There is already a magnificent program that more than anyone using a computer can be used regularly, is called LibreOffice. It can be installed on any computer, it is multilingual, it is simple, it has very high graphic features, it is an open source software, released under the GNU LGPL license, multilingual (over 50 languages worldwide) that you can download, install and use for free at will.

Together with a group of small but large designers, over thirty boys with high graphic qualities, several coaches have been contacted and together we have analyzed the various sports and identified the fundamentals of the game and the various technical gestures that are normally found in a particular sport. Then we called the players from each sport and took photos of the technical gestures in the various angles necessary for a global view of the field. From the photos we reproduced all the drawings. We have identified and designed for each sport all the views of the field and the accessories necessary for training, both generic and specific. All drawings created in vector format have been packaged and grouped into galleries, ready to be used by anyone.

Then over time we moved on to another software for the realization of 3D models, that is, three-dimensional models, still an opensource Blender software that is Free Software. ... and many other benefits have been added to the initial program. We are still making changes, improvements and new features, new sports, new models, new features that make GESTICS a really useful software for all coaches and teachers.

A work done with great passion and care by a team of many people. A sincere thanks to everyone not only for the commitment, but also for the harmony and fun that accompanied us in this project.

Save
Cookies user preferences
We use cookies to ensure you to get the best experience on our website. If you decline the use of cookies, this website may not function as expected.
Accept all
Decline all
Read more
Analytics
Tools used to analyze the data to measure the effectiveness of a website and to understand how it works.
Google Analytics
Accept
Decline
Quantcast
Quantcast
Accept
Decline